In March of this year, I was in Capetown on a long-desired trip to South Africa. My daughter texted me. “Stevie Wonder is going to be in concert in London in July,” she said. “It might be my last chance to see him live (her first too).” I’m not sure why she thought that, but it didn’t seem strange to me at the time. Maybe because I’d lost several people I was attached to in the preceding months. “Do you want to go?” “Shall I get tickets?” 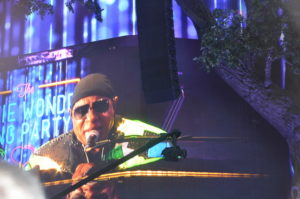 Every part of me fired thrilling at such a spontaneous leap. Her brother signed on too, and she planned to take her four-year-old son, who inspired the idea.  He’d come home from school with a harmonica, excited to play it for her. She, in turn, introduced him to Stevie Wonder’s music, including Fingertips, to which he danced his heart out, then pleaded “Take me to see him, mommy. Please.” There began her search for Stevie’s concerts. But moments after my sign on, she and I realized that massive bodies in Hyde Park and prolonged standing would not work for my grandson. Days later, my daughter invited her godmother, my dear friend, unaware at the time that the concert was on my girlfriend’s birthday.  My daughter wanted to share the joy of this wild, beautiful thing we were going to do because of the major challenges my girlfriend had faced in recent months. Spending time with my adult children, one in her 40’s the other in his 30’s, both leading busy lives, along with my girlfriend, held appreciable space in the sparkle of this untamed thing.

And then there was Stevie, accompanied on stage by two of his back up sistah singers, his body hefty now.

I experienced a flash of unsteadiness about him but it left me, not to return. There I stood, privileged to be with three of my beloved family members amidst a swelling of humanity, 65,000 strong, the kind of setting I usually avoid. Sweet Honey and the Rock, and Regina Carter, the exceptions before Stevie, and still, far from this scale. My girlfriend had tied up her African locks after I complained about being hit in the face with them as she turned her head side to side her arm in the air, her hand circling as she sang with abandon the lyrics to nearly every song the D.J. played between Lionel Richie, special guest, and Stevie.

But there is nothing like beholding an artist perform live. 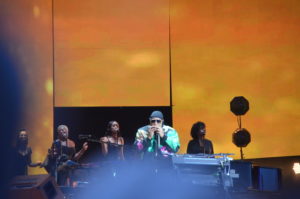 Feeling and taking in Stevie’s tenderness, his musical genius and loving spirit, his voice clipped at the edges but still his, his slamming band and back up singers — all moving through me, poignant as the touch of Grace. Moving through us. I turned to look at my daughter, moving her head, her eyes closed, her lips in a sublime smile. My son’s eyes were fixed straight ahead, his pleasure revealed in the upturned edges of his lips. At one point, a Black woman Brit standing near me said, “He doesn’t look well,” referring to Stevie. I did not doubt her, though I didn’t see what she saw.  Stevie just kept giving, song after song for two hours, moving on his own from piano to keyboard to slide guitar, with one short DJ break, Stevie remaining on stage. He even validated “the bullshit” in our world, the need for change. Then, as we stood undaunted in the drizzle that had begun, he shared that he needs a kidney, that he has a donor, and will do three more concerts then “take a break.” Worry rolled up, how long will it take for him to do the three concerts? Should they come first?

As Stevie said at one point, “I can’t do all these songs,” reminding me of just how prolific he’s been.  I hoped he’d sing Ribbon in the Sky.  But as we eased out of Hyde Park that night I realized Stevie is a Ribbon in the Sky, and that going with wild things, near or far from home, can be so nourishing of the soul.