We are flooded.  We have been flooded. The question comes up in me, how can my body absorb, hold, process yet another round of recurring atrocities and assaults against Black bodies, Black people?  Breonna Taylor, then we learn late of Ahmaud Arbery, occurring a month before Breonna, George Floyd then Rayshard Brooks, now Elijah McClain, we learn of, killed before all of them. More to come, for sure. The only hope — that there will be far fewer until none are strung together in the future, in contrast to the graves under the sea and earth that mark the trail to the present. 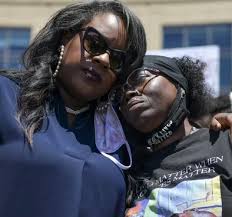 I am grateful that my grief spills in loud sobs now or rants. There was an earlier period of months of murdered Black men, women and perhaps gender-fluid people when I fell numb. Like my feelings had burned to ash. I could not feel or express the loss, the rage. It just seemed too long, too big. It was emotionally protective. And yet, the body takes no fakes. It always knows and holds the deal, even when I am/we are cut off emotionally or doing a cognitive thing to distract from the pain. I wonder if my lungs suffered during that period.  My Jin Shin Do massage therapist and friend Debby says that in Chinese medicine, the lungs are vulnerable to grief. I remember the first time she pressed a certain point near my armpit, and suddenly a spell of tears rushed out of me.  From where I could not say. Louise Hays, who published on the relationship between health conditions, organs, and emotional themes, said that as well about the lungs (note: her work is not without criticism).  I’ve recently wondered whether respiratory affliction is another one of the health conditions that Black people suffer from disproportionately. Loss has long slept uninvited in our beds, and those of other oppressed people.

While there is risk in the lack of social distancing among protestors there is also self-care in being there, in acting on the demands for justice, conveying dissent day after day in the moving of their bodies, insisting that they will not “suck it up.” Their bodies refusing to be simply a receptacle.

In another time and space, I likely would have risked being on the streets.  I may still.  But in the meantime, like so many who have chosen to continue social distancing, I have upped the care for my body and spirit.  We each need to find the particular resources that speak to us, that nurture our body-mind-spirit and empower us.  I recently attended a “blacksit” with Rev. Angel Kyodo Williams, a Zen Buddhist and co-author of Radical Dharma, Talking Race, Love, and Liberation.  These words of hers still ring out like the long-running sound and vibration of a large Tibetan bowl I recently brought into my home.

“Rest is radical. Rest is resistance.  It was never dreamed of for Black bodies.”

So I’ve become focused on getting more sleep, along with my other restorative practices and social justice actions.  It’s good to see rest as one of them.

I hope you will too!