Boundaries are a key theme of oppression.  They can be taken for granted by those in visibly privileged identities.  It is presumed they will be respected.  If not, the right to reinforce them directly or through agencies of control is assumed and acted upon.  For those of us visibly among the marginalized, our boundaries are tissue paper, to be trampled on at the discretion of the empowered.  This has been playing out forever and today.  The now established borders of the U.S. are held with sanctity because they were established by the ancestors of White men and held by their offspring.  The violation of the boundaries of African and Indigenous land and people to fashion this territory matter not.  The violaters claim to be the violated, the upholders of law.  But it’s plain to see who is being assaulted and traumatized, as Brown people’s children are taken away, with no care, no system of ensuring reunification. It is clear who are the takers, that everything is for their taking, their elevation, their rewriting, the stomping of their boots. And I see no shame. 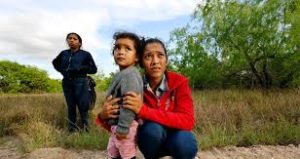 President ’45’ is only the pus head, because the infection is widespread among our government representatives — silence while children are poisoned in Flint, former DEA agents now on pharmaceutical payrolls, former DEA folks turned draftee(s) of legislation to hamstring prosecution of pharmaceutical companies that pushed opioids like a goldrush, lobbies for corporations that want more freedom to poison our water, air, earth, to control what beans get planted, to keep us from knowing what food is genetically modified, to flood us with guns. Money, money, money, money — above all else.  I believe what I see, no shame among them.

This is what I want to hear from those galloping proud with no integrity, no courage to stand against callousness and dehumanization.  Speak of your shamelessness.  Of when there’s only you and the moon, in the quiet of night, how it is to be a shell of a human being.

In the meantime, I will honor no shame visited upon me by the shameful. I will continue to be inspired by Bryan Stevenson, whose Just Mercy, I am reading, and many others, whose souls are so loving and fierce. I will find my way past tears to act for the vulnerable families seeking freedom here from terror, only to be snatched up in terror’s new clutches.